MAĞUSA’DA NE YAPSAM?
The most special point of Cyprus, the pearl of the Mediterranean; Famagusta with warm climate, shiny sun, amazing beaches, magnificent history, cultural richness, delicious tastes and warm people, come to Famagusta and let's go on a special discovery together.

DISCOVER THE MAGIC OF HISTORY IN FAMAGUSTA CASTLE.
The most magnificent building that witnessed the history of the Island is Famagusta Castle... We go on a time journey within Famagusta Castle and castle, which includes dozens of historical sites. Built in the 14th century by the Lüzinyans in connection with famagusta Port; The total length of its walls is 3 km, the height is 18 m, the width of which is up to 9 m in places, this magnificent castle ensured that the city had its most commercially productive period. One is the city with castle gates that open directly to the port and two are located parallel to the port; it has become one of the most important stations of the trade line established between east and west. It also has the ability to be a hub that merchants use both as a port of call and as a transit zone. In the 1500s, when dominance on the island passed to the Venetian, some changes were made in the castle to defend against the Ottomans. A 46 m wide moat was dug around the castle and filled with water. It is known that the famous song "Famagusta Port" was written for the valiant Arab Ali, who worked at the port and was killed by British soldiers. 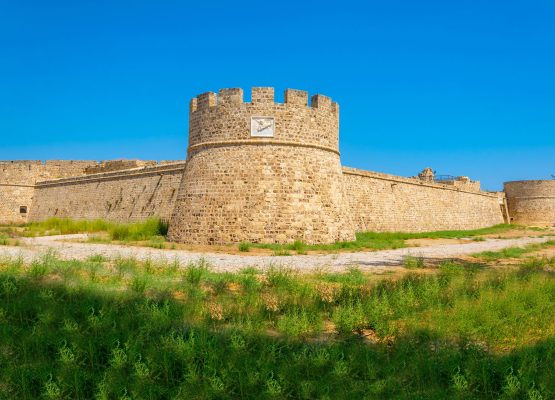 Othello Castle
Castle in castle... Othello Castle, which has another castle in the area that coincides with the north-eastern corner of Famagusta Castle, was built by the Lyzinyans in the 14th century to be used as the main entrance to Famagusta. Named after Othello, the hero of Shakespeare's famous tragedy in the English Epoch, there is a large hall inside the castle. This hall hosts many cultural and artistic events, especially Famagusta Culture, Arts and Tourism Festival.

St. Nicholas Cathedral (Lala Mustafa Pasha Mosque)
One of the uniquely beautiful works in the castle is Lala Mustafa Pasha Mosque, which was built during the Epoch of The Lüzinyans and is referred to as the most beautiful gothic monument among the structures located in the Mediterranean Sea... This unique work, which hosted the coronations of kings in the period until the island administration passed to the Ottomans and turned the cathedral into a mosque and it’s name is inspired from Lala Mustafa Pasha, who excelled in the conquest of the island. Inspired by the. Reims Cathedral in France that is one of the most prominent examples of gothic style with windows, decorations and embossed animal figures. The westren facade was inspired by Reims Cathedral and it has been protected until the present. In the forebrain of the mosque is a historic Cümbez Tree, which is claimed to have been erected at the time the construction of the cathedral was started. This historical tree, the trunk of which reaches about 3 meters thick, also has the title of the oldest tree on the island with magnificent structure...

Namık Kemal Dungeon and Museum
One of the most important people for Turkish literature is Namık Kemal. The Dungeon where he was imprisoned for 3 years during his exile and museum. It is located west of Lala Mustafa Pasha Mosque. The items and documents of the Epoch are exhibited in the museum. Nowadays, ın the museum square New Year's celebrations and concerts are performed.

Venetian Palace
Namık Kemal Dungeon is located in the courtyard of the palace, which was built during the Period of The Needy and used as a royal palace and has only two walled side by side due to the effects of earthquakes.

The museum, which contains the tomb of Mr. Canbulat, who was involved in the enslale of the island in 1570 and was martyred in this area called the Arsenal Tabya. In the museum Mr. Canbulat's personal belongings and the weapons of war used in the epoch are exhibited.

Famagusta Castle takes you on a magical time travel with splendid beauties which are full of historical places and houses, churches, Turkish baths and artifacts that have survived to the present day.

BE CHARMED BY GREEK AND ROMAN AESTHETICS IN THE ANCIENT SALAMIS CITY.
Tefkros, the son of King Telamon, who was expelled from Salamis City in Greece. He started to inwell to ısland with a group of prisoners who took with him and he established Salamis City in 1184 B.C., , The city hosted different civilizations with invaluable beauty for years. The City that witnessed too many thrones wars, was looted and destroyed by the Arabs in 648 A.D. Salamis City is welcome to visitors with buildings that symbolize urban life such as ancient theater, bath, water cistern, marketplace bearing the traces of Greek and Roman civilizations. Ancient theater is used frequently for cultural and artistic activities by the people of Magusa 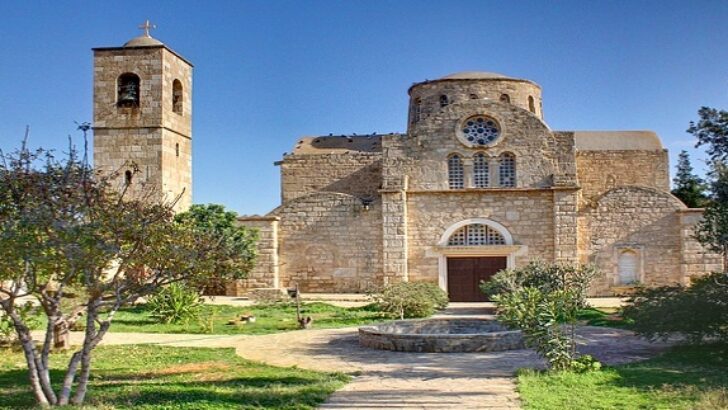 TO THE JOURNEY BEYOND BELIEFS IN ST. BARNABAS MONASTERY
The Monastery was built in 477 AD taking its name from St. Barnabas, who was educated in Jerusalem and indwelled in Cyprus to spread Christianity across the island. The monastery consists of a church, rooms on three different sides of the church and a courtyard and the story is In the dream of Bishop Anthemios, he sees St. Barnabas’s Tomb; determining its location and building this unique monastery. Now, The Monastery serves as the Icon and Archeology Museum today. 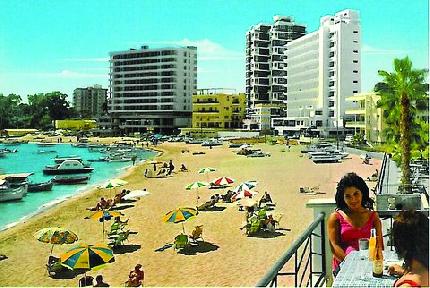 FREEZE THE TIME IN AND MARASH.
Marash is located in which has the largest port on the island, the most valuable trade center and tourism region; Famagusta and It was one of the favorite holiday paradises of the Mediterranean as one of the world's most important entertainment and tourism centers before the Cyprus Peace Operation. Marash was welcoming thousands tourists every year with impressive buildings inspired by both the world modern and British architecture. Marash had to be closed to settlement and transportation in 1974 because of political reasons. Marash opened to visit on October 8, 2020 and is almost an open-air museum, taking the visitor on an unforgettable time journey as a ghost town filled with the painful traces of war.

GET TO KNOW THE ISLAND CULTURE WITH ART EVENTS.
Famagusta has many cultural - art events and it is full of the opportunities that you will feel the warmth of the Mediterranean Culture and the sincerity of the island life. Famagusta Municipality organizes the International Famagusta Culture and Art Festival every year. The Festival welcomes the guests to unforgettable events that are giving place to every branch of art with opulent programmes and starting in the spring and until the autumn. Eastern Mediterranean University established in 1986; since that to present gives great importance to art and Cypriot culture. In the biggest public events of the university; Spring Fest, EMU with Folk, Rock’n EMU and Sand Sculpture Fest. Specially, in Spring Fest offers many activities like theater, concerts, interviews of famous authors and philosophers, cinema.

EXPERIENCE FUN WITH WATER SPORTS AND ENTERTAINING EVENTS.
Famagusta offers unique opportunities for water sports enthusiasts in its golden sand-covered beaches and the vast blue of the Mediterranean Sea. At the Silver Beach, you can have a safe and quality experience for water sports.At Eastern Mediterranean University's EMU Beach Club, you can enjoy diving and share the magic of the underwater world. You can have an unforgettable day with the glittering sandy beach and fun-filled activities of Kocareis Beach, which has one of the best opportunities for motorized water sports in Famagusta. The moat, built during the Venetians' epoch and surrounding Famagusta Castle, is now the indispensable address of the islanders' jogging and bike trip... With the service offered by Famagusta Municipality, you can rent one of the bicycles placed at the entrance of the trench and experience both sports and entertainment together in the majestic view of the historical walls.

ENJOY THE SHOPPING, MIXING INTO SOCIAL LIFE.
Cyprus culture, which has been adorned with traces of different civilizations for centuries, has rich experiences in many ways. Famagusta offers countless shopping opportunities for those who want to have handicraft products and special tastes of this unique culture. For "Lefkara" danteli, one of the most important examples of Cypriot handicrafts, you can choose any shop that comes during the castle. Hellim is the most famous cheese of Cyprus, is able to find it in almost every market. Harnup (Goat Horn), which grows in its completely natural environment in the characteristic climate of the island, is on the shelves as a unique alternative for both yourself and your loved ones, especially with its exquisite molasses. This special flavor, which is harvested only in a certain period, is a health-filled alternative that we recommend you to take with you... Salamis Road, one of the most important streets of Famagusta with a warm climate that averages 20 degrees during the day even in winter, offers quite an alternative to shopping. With universities, cafes, boutiques and colorful social life created by students from all over the world, your time on Salamis Road allows you to meet the hospitality of the People of Cyprus and feel the island life with all its naturalness and warmth.
LET US CALL YOU

Sign up to receive exclusive news and offers about Grand Sapphire City Hotel I have read the terms and conditions and the data protection declaration and accept them.